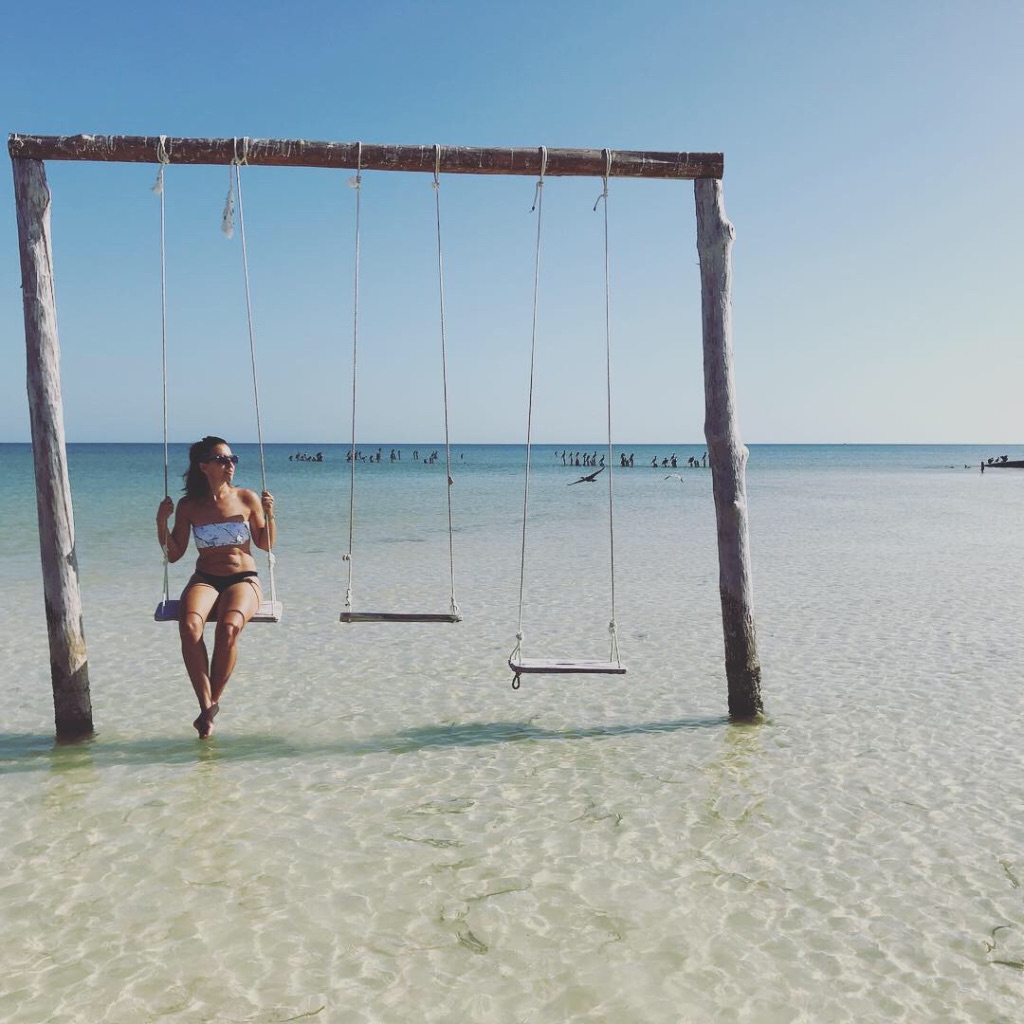 I’ve had my eyes on Tulum for quite sometime so we decided to start our trip in Central America by getting a ticket from Thailand to Cancun, Mexico. We also wanted to catch the last bit of the nice season in Quintana Roo before the super hot and humid season began (May-ish) rather than leaving it to later.

We decided to skip the crowds and commercialism of Cancun and went directly to Tulum from the airport (2.5 hours with ADO bus for $14 usd).

I thought we’d like Tulum because of its unique landscape and ancient Mayan ruins all around. If you have Instagram, I’m sure you’ve seen one (or many!) pictures of the stunning cenotes and lagoon’s in this coastal region of Mexico.

Tulum is separated into two parts: La playa (the beach) and El pueblo (the town) where the locals actually live. We stayed in Tulum town, which was a 20 minute bike ride or a short taxi ride away to the beach. The town offered cute coffeeshops, artesanal bakeries, fruterias, bars and lots of good food options, often much cheaper than at the beach.

Chilling at the Lum Hostel

Michi enjoying cold beer and tacos on the beach

The beach strip is covered with upscale resorts, fancy restaurants, beach clubs, and bohemian boutiques. If you want to spend time on the beach, you have to go through a resort, which isn’t easy as they have strict rules. I didn’t appreciate this at all as you are allowed to enjoy the beach if you had money.  We later found out that the locals made a left turn instead of right (to the resorts) and enter through Playa Maya in the national park for free.

While we were there, unfortunately the infamous glorious white sand beaches and turquoise waters of Tulum were covered with seaweed that washed ashore so we went to the beach once through a restaurant called Taqueria La Eufemia. If you can ride your bike for 45 minutes to reach this restaurant from town or pay 100 pesos for a taxi, you can enter the beach without paying for sun beds. Our second trial to enjoy the beach through Playa Maya wasn’t a success as there was too much wind and the waves didn’t allow us to sit or go on a snorkeling tour.

Apparently the tourist boom has already started in Tulum. Beaches come with a price and sadly there’s no charm of a small Mexican town left. You can find trendy/hipster restaurants all over (think smoothies, vegan, raw food, etc) so expect higher prices than the rest of Mexico. If you go around on your bike inside the streets of Tulum town, you will notice a lot of new constructions for luxury condos. The locals are pushed out and the gentrification has started just like anywhere popular in the world instead of preserving the authentic local life.

Since we were not able to swim in the ocean, we went to a cenote every day to cool down in the crystal clear uderground rivers and lagoons. 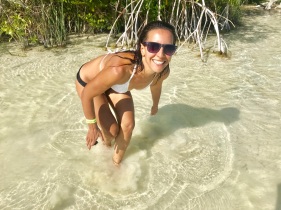 Hostel buddies at the cenote tour 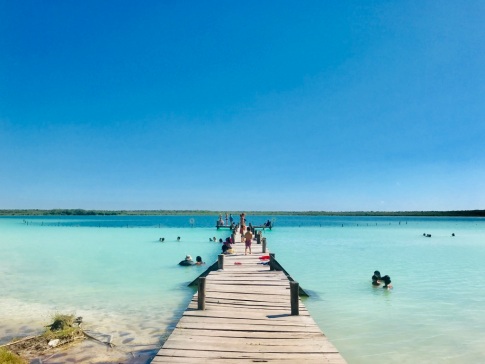 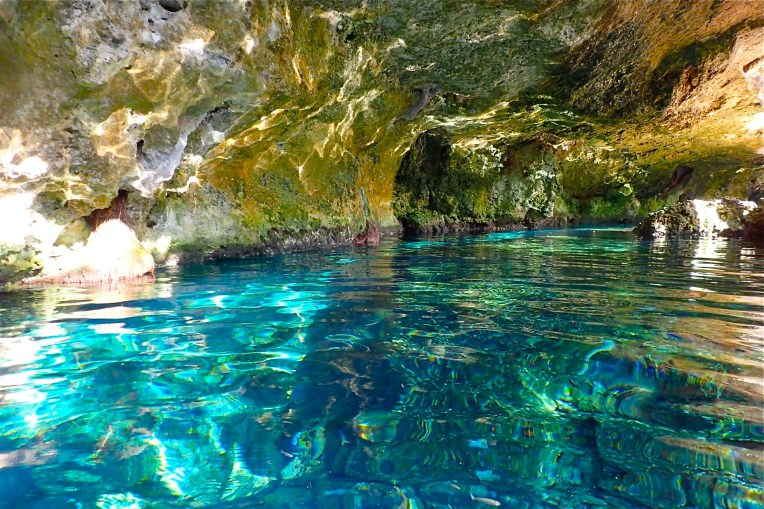 I enjoyed these beautiful cenotes and lagoons we had a chance to visit while in Tulum:

Cloudy skies and a bit of rain during the tour

We spotted turtles and sting rays but no dolphins 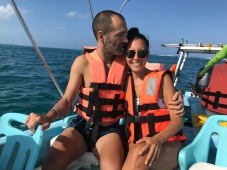 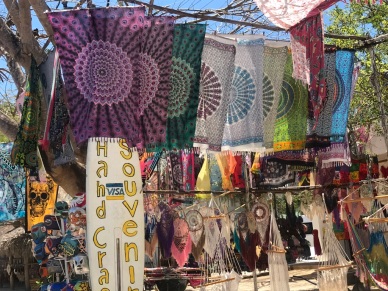 Dreamcatcher shops on the way to Coba 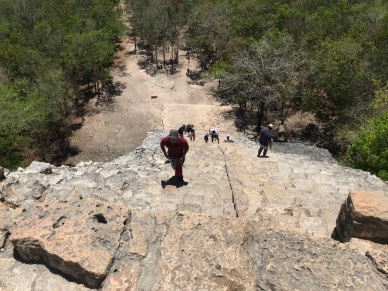 On the top of the pyramid!

I have to come back here when I have a home!

Good luck climbing to the top! 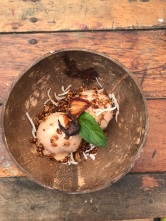 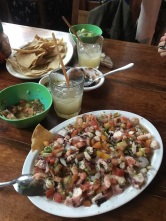 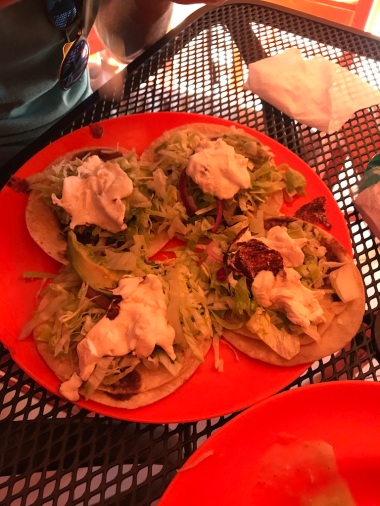 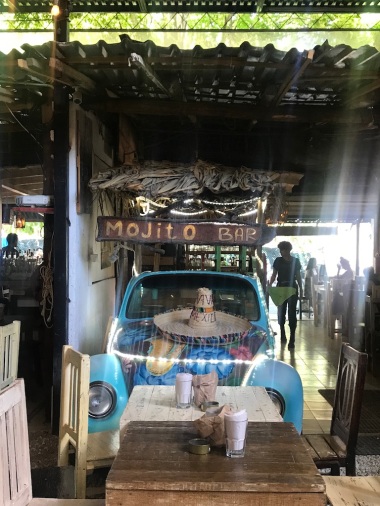 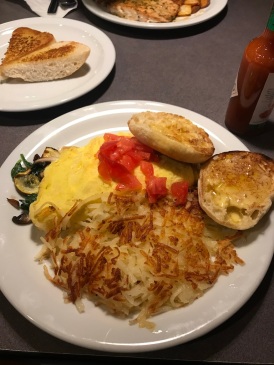 If you’re hoping to work out of Tulum, keep in mind that the internet is very weak in this area. Even the Telcel simcards we bought were getting a very weak signal so be ready.

Holbox is a small island in the north of the Yucatan peninsula in the state of Quintana Roo. It’s pronounced Hole-bosh, which means black hole in Maya language. I had heard about it from the folks I’d met along the road as well as some blogs I had read. It was a laid back hippy spot and this once a fishing island was also rumored to be the next Tulum. I really hoped to catch it before it got super crowded and spoilt but unfortunately we were too late. 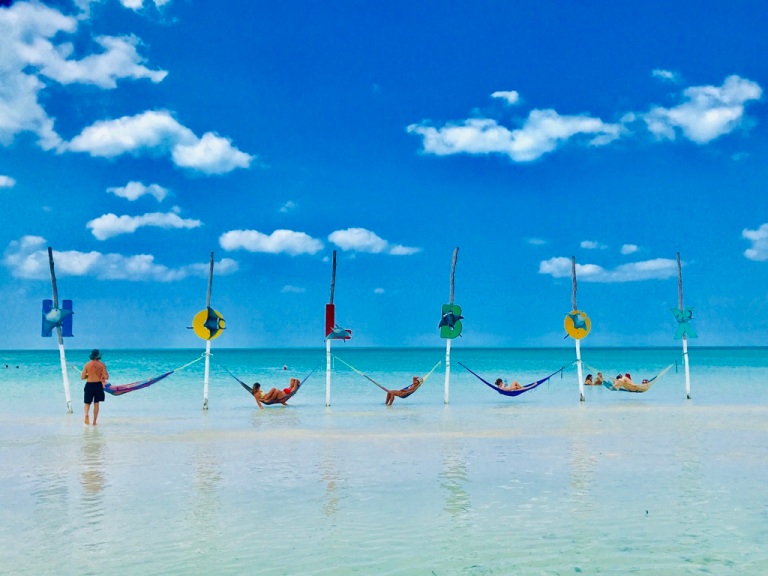 Well when I hear hippy, I automatically think about being in nature without my shoes and money 🙂 But apparently that’s not the case in this part of Mexico. Holbox is laid back because there isn’t much to do other than spending your time lounging on the pristine beaches. However, in terms of prices, the cheapest private accommodation we found with AC was $60/night and one lower option was camping.  There are also Airbnb options on the island and if you’re new to this site, you can get a Free Airbnb Credit for your first stay. This helps towards our next stay too 🙂

There’s a growing expat community so English is somewhat understood and an Italian girl we met in a restaurant told us the prices had almost doubled if not tripled in the last couple of years, hence they were forced to leave soon.

The town of Isla Holbox is very small and easily walkable. Instead of pavement, you’ll find dirt roads and the only cars around are golf carts, which also serve as taxis. We arrived there after a half day of rain so there were lots of puddles to jump over and when things got dry, it got very VERY dusty.

The heat in Holbox is no joke and there’s no natural shade on the beach! If you don’t want to have a sunstroke in the scorching sun, be readty to pay to a beach club for a sunbed under their umbrella.

We rented hammocks on our first day in the shade and by asking on Facebook groups, we heard Punta Coco on the western tip of the island offered natural shade under the trees. The walk on the beach from the central part of the island to Punta Coco was a delight. For 2 days, we didn’t want to leave our breezy chilling spot with our feet almost touching the shallow turquoise waters. 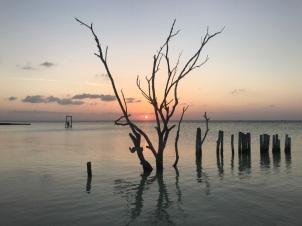 I highly recommend you to walk on the beach (early in the morning and during sunset)  vs biking if you’d like to catch the beautiful sights of starfish, pelicans, and other tropical fish and birds. While watching the birds in awe on another corner of the island, we were told that we had missed the whales that were visible form the center but that’s the story of my life. I haven’t had the honor of meeting any whales or sharks while I’ve gotten so close to them in many occasions. Hopefully next time!

As for food, you’ll find so much seafood, lobster pizza, gelato shops, cocktail bars, fancy beach clubs,  and world cuisine. But you would find us rarely at any of those in Mexico as we like to blend in with the locals. So we’ve tried some taco places and restaurants serving typical Mexican dishes.

I hope this little guide to Tulum and Holbox inspires and helps you to make the right choices while in Mexico.

Why I call this a conscious blog? Michi and I have been pursuing a path as good global citizens. That meant for us respecting the culture, environment and people of the places we visit. We always look for opportunities to contribute to the local economy and learn from them. While doing that, we try to leave the smallest ecological footprint behind us.

I'm an explorer and environmentalist who's obsessed with all living things, an avid world traveler, travel blogger, and a yogi. I chose a nomadic minimalist lifestyle a few years ago and started this blog to share my off the grid experiences with my fellow adventurers. So nice to meet you! :) Join me in my travels both in the worldly and the spiritual sense. I look forward to hearing your story! Love and light View all posts by Life Is Beautiful