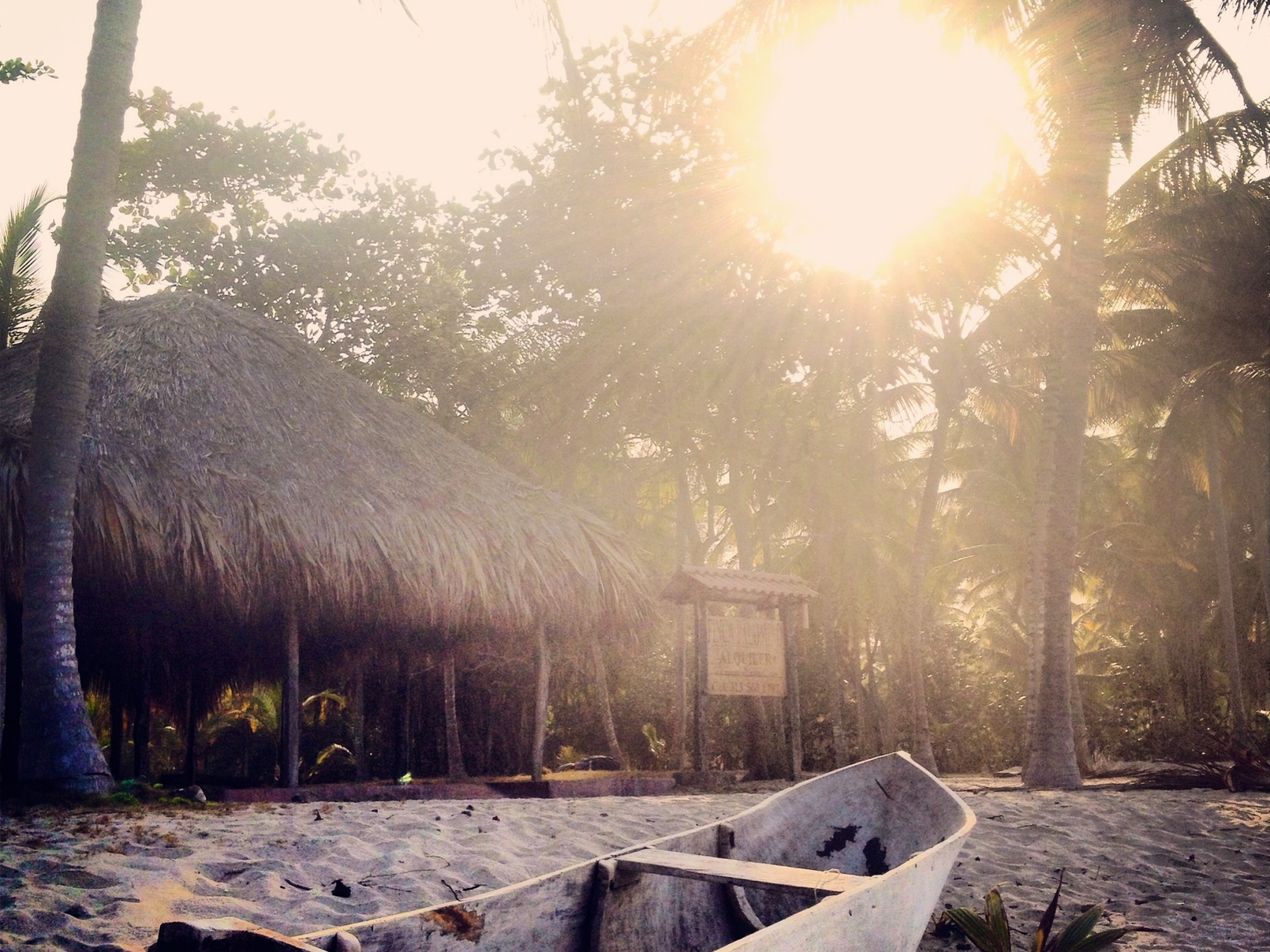 Colombia is a secret well kept. Thanks to most of the governments, including the U.S. State Department, that repeatedly warn their citizens about the security concerns in this country, Colombia has been closed to the outside world for so many years. Their tourism activities have been targeting domestic travelers, hence most of the Colombians did not bother to learn another language. This includes the ones in the hostel receptions, bus companies, money exchange offices, even some Tourist information desks! I strongly recommend you to take a few Spanish lessons before going, to learn the basic stuff so you don’t starve to death or buy a bus ticket to the moon. Some fabulous online tools I have found useful and downloaded to my i-phone before my trip are Duolingo, Google Translate, and Spanish Dict.

Crime existed in the streets but I stayed safe from the beginning till the end, so I will only mention the stories I’ve heard from other backpackers: robberies on dark streets and on hiking trails and unfortunately a mystery homicide of a friend of a friend I met during this trip. I was also warned to be cautious against Burundanga (Devil’s Breath), a disabling drug that leaves victims disoriented and was given in the form of a candy, cookie, drink or a business card laced with it.

My protection strategy while backpacking solo was:

Even though the Colombians seem to be happy to have left behind the bloody cocaine cartel times with the death of Pablo Escobar, drugs still have a big presence. I have come across drug dealers on the streets during most of my trip.  You see a lot of cops around (who look like they just got out of high school) who stop people to make them turn their bags and pockets inside out in almost every corner. I heard this action usually didn’t target female tourists (and luckily I was in this category), but heard from some male backpackers that they had been searched almost as often as their Colombian peers. While traveling, it is usual that your bus or car would be stopped every few minutes at a check point. 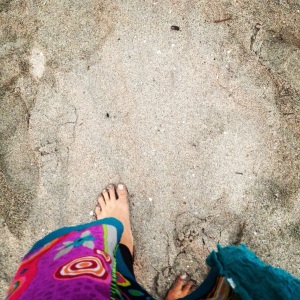 The reason of my trip to Colombia was to join an Ayahuasca Retreat on a private beach property in Parque Tayrona for 8 days and I will tell about it in another post in detail because it deserves special attention. But everything else I have seen in Colombia was as eye opening as the retreat. I am so happy about having made the decision to go last year.. and I can’t wait to go again in January 2014!

My friend Gul and I flew from La Guardia (NYC) to Bogota via American Airlines with a 2-hr layover in Miami. If I didn’t use my miles, I would probably fly with Delta Airlines that has daily direct flights for about $400 USD RT, which is a pretty good deal.

Also VERY important point to keep in mind when choosing flights is that entering to the US from South America through Miami makes you a potential suspect for smuggling drugs. So be ready to spend extra time in the check points to answer questions and be searched thoroughly, again and again. Especially if you are a single unemployed woman who happened to have traveled in Colombia solo. What else would you be doing in Colombia by yourself?!

We took a cab from the airport to Candelaria, the old colonial town, where our hostel was located. The cost was about $20,000 COP. You need to negotiate the cost of the trip before you get in the cab otherwise you will be charged a random amount that the driver thinks your tired tourist face deserves to pay. You can ask your hostel to tell you how much the cab would cost before your travel. It is also advised to print the map of your destination and learn how to say that in Spanish. 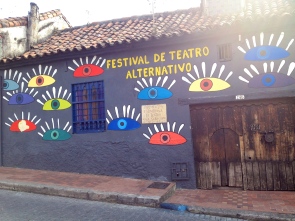 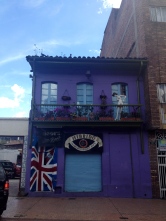 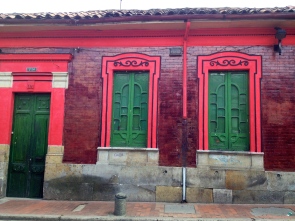 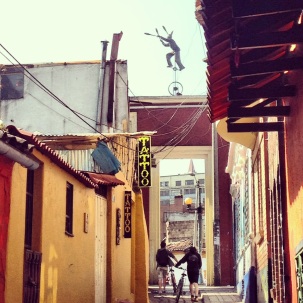 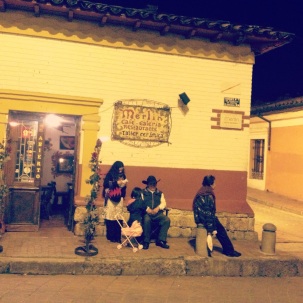 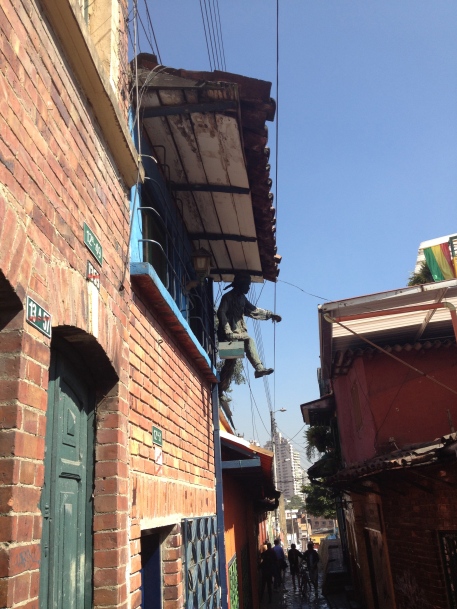 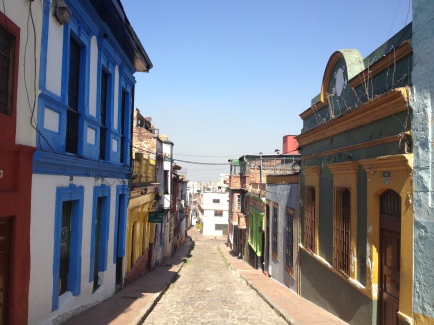 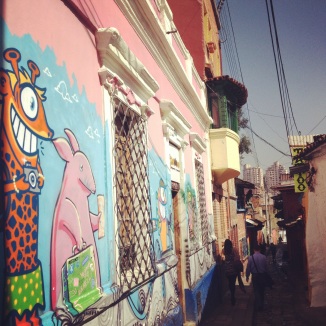 We stayed in a double room at Hostal La Quinta Colonial that came to about $15/per person  per night including coffee and breakfast. It was a youth hostel whose guests at the time were 4 Argentine students, 2 Turkish traveling buddies from DR and Romania and 2 other Turks (us!). At first, it was a bit scary to see the iron gates at the door of our hostel but later we noticed that this was the case in almost all parts of Colombia. 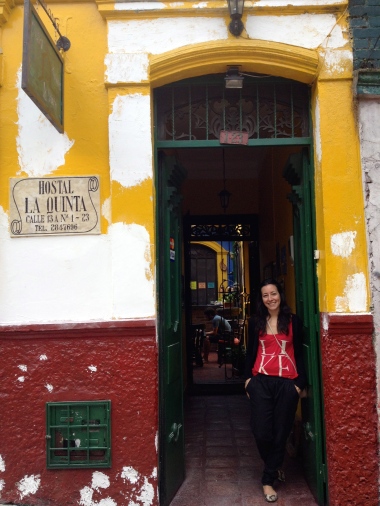 Our hostel in Candelaria 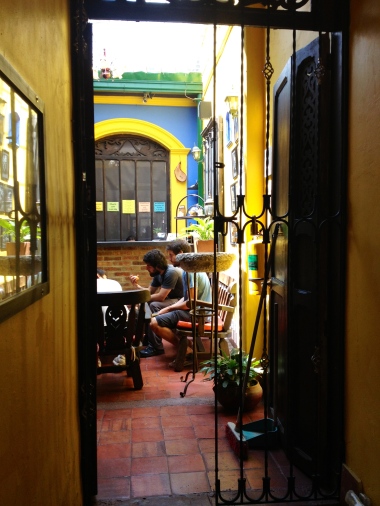 It was fun to walk around the skinny cobble streets of Candelaria and seeing colorful houses and amazing graffiti covered walls during the day but I can’t say the same thing for the night time. Streets appeared to be completely abandoned after the sun went down, and busy corners were occupied by the drunk and drug addicts. Despite the police checking bags and pockets randomly, you couldn’t spend a minute without looking over your shoulder.

While graffiti isn’t technically legal, it’s a form of expression that has overtaken the entire city of Bogota. You can take a free Graffiti walking tour by an expat street artist from Australia named Christian (http://bogotagraffiti.com/). 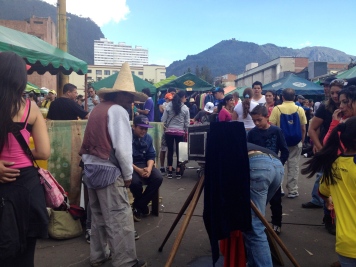 we stumbled upon this Flea Market on a Sunday 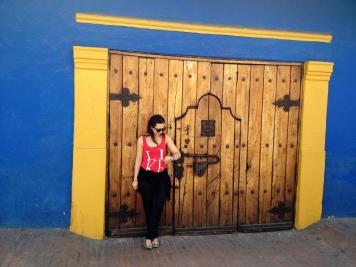 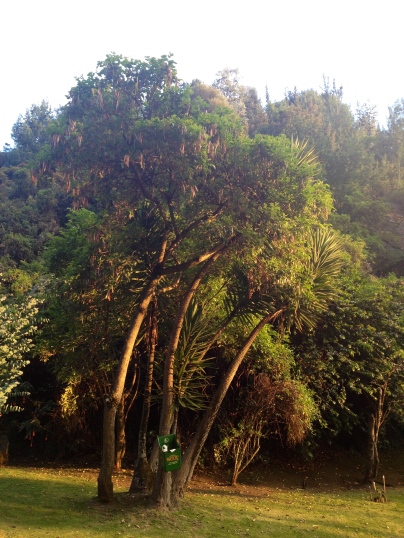 It’s possible to find nature in some parts of Bogota

Gold Museum (the gold that was recovered from La Ciudad Perdida was kept here), Monserate (a hill that can be accessed by aerial tramway, a funicular or by climbing, the preferred way of pilgrims. There’s a church and a restaurant on the top. You can see it from nearly every point in Bogota), Usaquen (a neighborhood with nice streets, street vendors, posh restaurants/bars (which reminded me of Miami) ), Plaza de Bolivar, Parque Simón Bolivar. 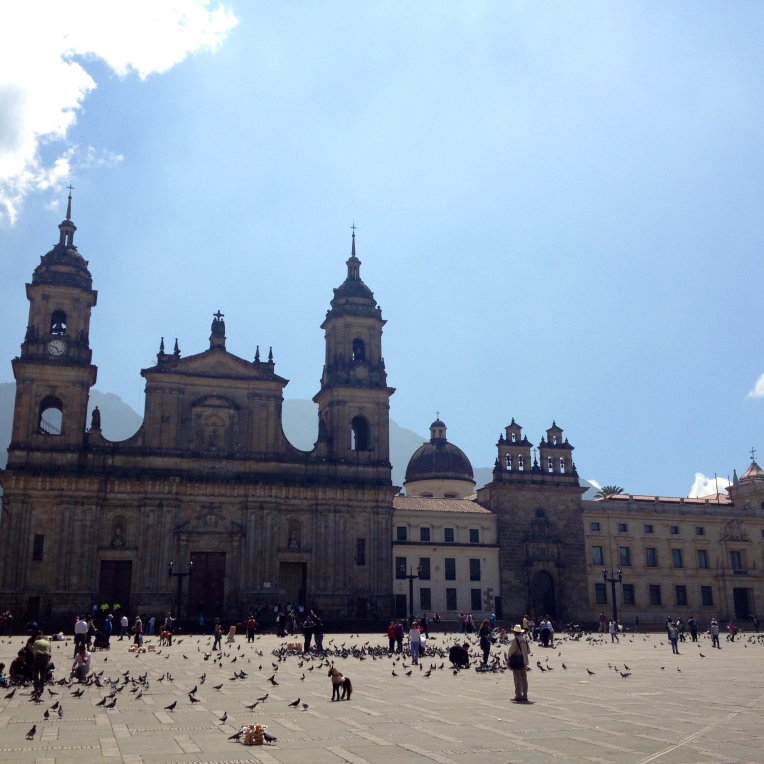 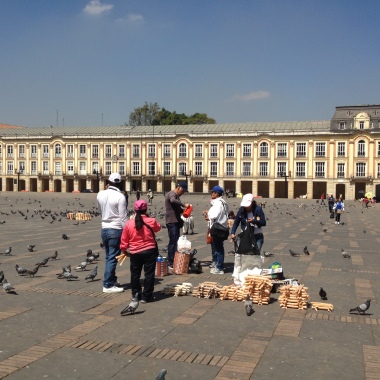 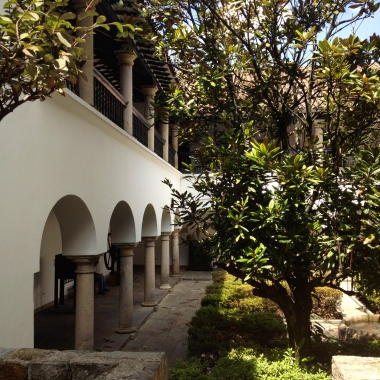 My next stop after Salento (see previous blog post) was the infamous Medellin via bus which I took from the center in Salento towards Pereira at 7:50 am (or there’s another one at 12:30) COP $5700.  Duration: 1 hr

From Pereira, I took another bus to Medellin at 9:15 am (Flota Occidental) COP $35,000 ,7 hrs (including a few stops on the road because of the coffee farmers protests) There are a few other buses that leave later during the day but you need to transfer to another bus in Armenia, which will make you lose about 2 hrs.

I traveled along 2 lovely Dutch girls, 1 Australian surfer dude and 2 girls from Berlin who had 2 months left from their 1 yr world tour! I stayed at Happy Buddha Hostel (@calle 35, 7-108) in the most happening neighborhood of the city: El Poblado. Think like Soho of Medellin.Coffee shops, clean public parks, a vibrant nightlife, and upper-middle class condos were plentiful.

It was a great treat to stay at this hostel  after spending a month in run down places all over the country. Great location, hip, urban, modern, nice, clean, English speaking owner& receptionists, pool table, great dvd selection, chill out music streaming from the speakers in the common areas, nice terrace, etc.  If you are a girl, stay in the all girls dorm which has its own chic bathroom just for your use! BUT the best part is the nightly rate: $15 USD! 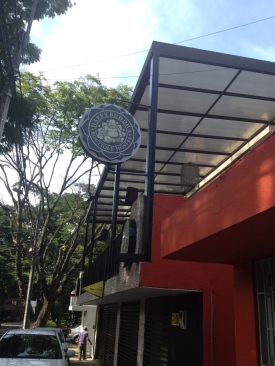 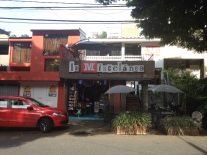 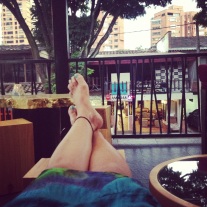 chillin in the hostel’s balcony 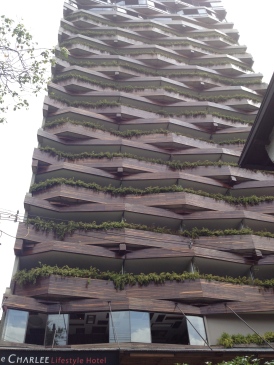 A good symbol of the modern and green movement in Poblado 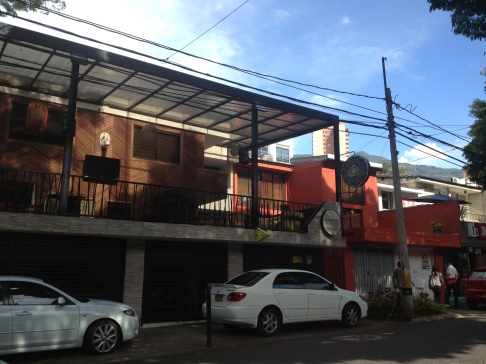 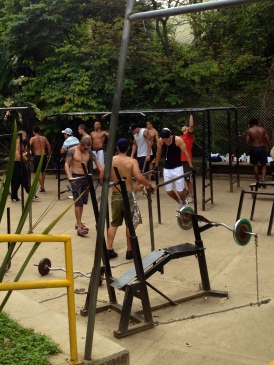 If you want more like a party hostel, you should try La Casa Kiwi – nice lobby, terrace, bar, free computers you can use, pool table and I heard there was pool on the roof. Rate is the same.

Free walking tour with Pablo: The free tour that was given by this amazing young dude who was so passionate about his city and the paisa culture. We walked around for about 4 hrs and saw most of the downtown area including El parque Botero. He now has a website: www.realcitytours.com 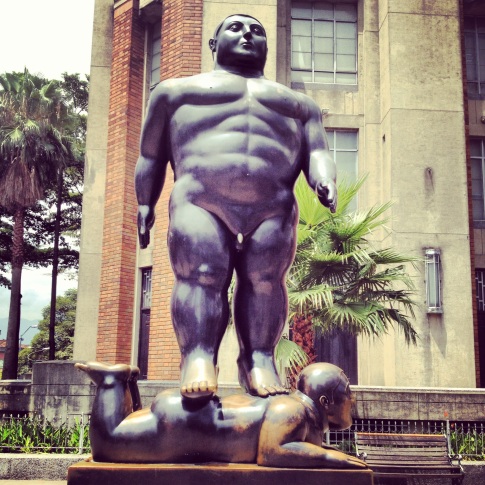 El Botero statues around the town 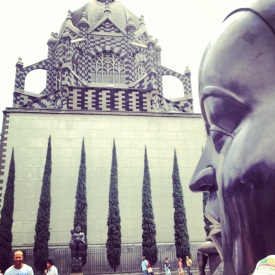 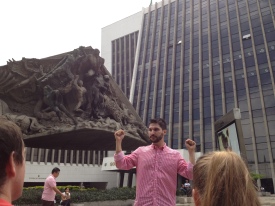 Here Pablo is speaking proudly about the history of Medellin 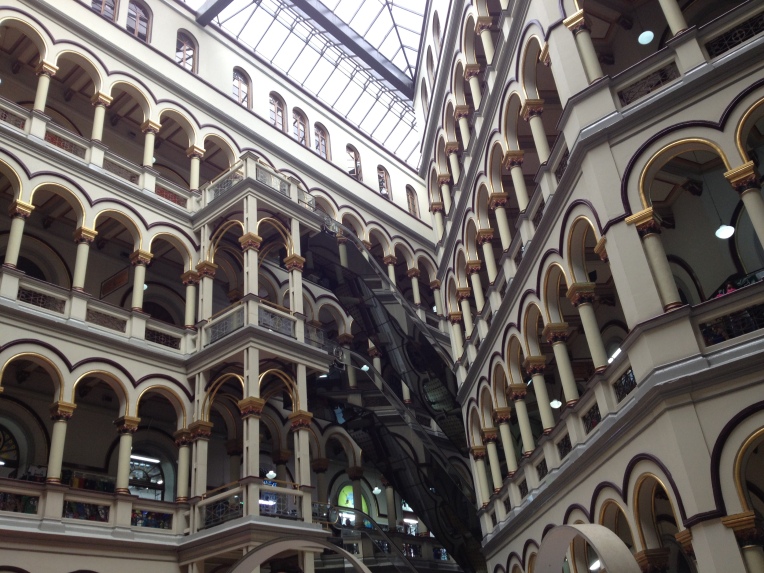 $30 USD- The tour leaves at 10 am from La Casa Kiwi. Book a day or 2 before coz it fills up quickly. We learned that Pablo had been the enemy (killed directly and indirectly thousands of ppl) and the savior of this city (the poor, mainly for their votes) and his death was the start of the life of this city. I took the tour with 6-8 ppl in a minivan that drove us around the houses where he had lived with his family, he had been killed in and the offices he had used (all bombed by his enemies), and finally his grave.

Since the mini van drove us for 5 hrs around town, the very savvy guide told us all about the places we had passed by so it was more like a city tour. This tour is definitely recommended to understand the past and current status of Medellin that does not want to be identified with the cocaine cartel. 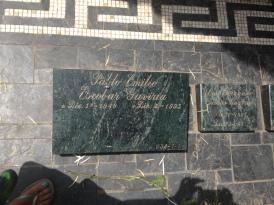 Escobar’s thombstone. Apparently thousands of people flooded to his funeral to say their last goodbyes.

Other places to see:

La Zona Rosa in Poblado is the place where you can find all the fancy restaurants, bars, etc.

El metrocable is a teleferic working as a metro. You can leave the metro and go right into the teleferic. It goes over dozens of slums if you are curious about them.

If you want nature, you can take a day trip to  El Penol and Guatape. The tour picks you up at 7 am from a travel agency near the hostel and costs $70 USD including transportation, food, and boat tour. I didn’t join this tour as I refused to wake up that early but the girls who did it confirmed it was beautiful but exhausting.

Tip: Try bandeja paisa while in Medellin, which is a dish that was recommended by some Colombian friends but I forgot!

I'm an explorer and environmentalist who's obsessed with all living things, an avid world traveler, travel blogger, and a yogi. I chose a nomadic minimalist lifestyle a few years ago and started this blog to share my off the grid experiences with my fellow adventurers. So nice to meet you! :) Join me in my travels both in the worldly and the spiritual sense. I look forward to hearing your story! Love and light View all posts by Life Is Beautiful