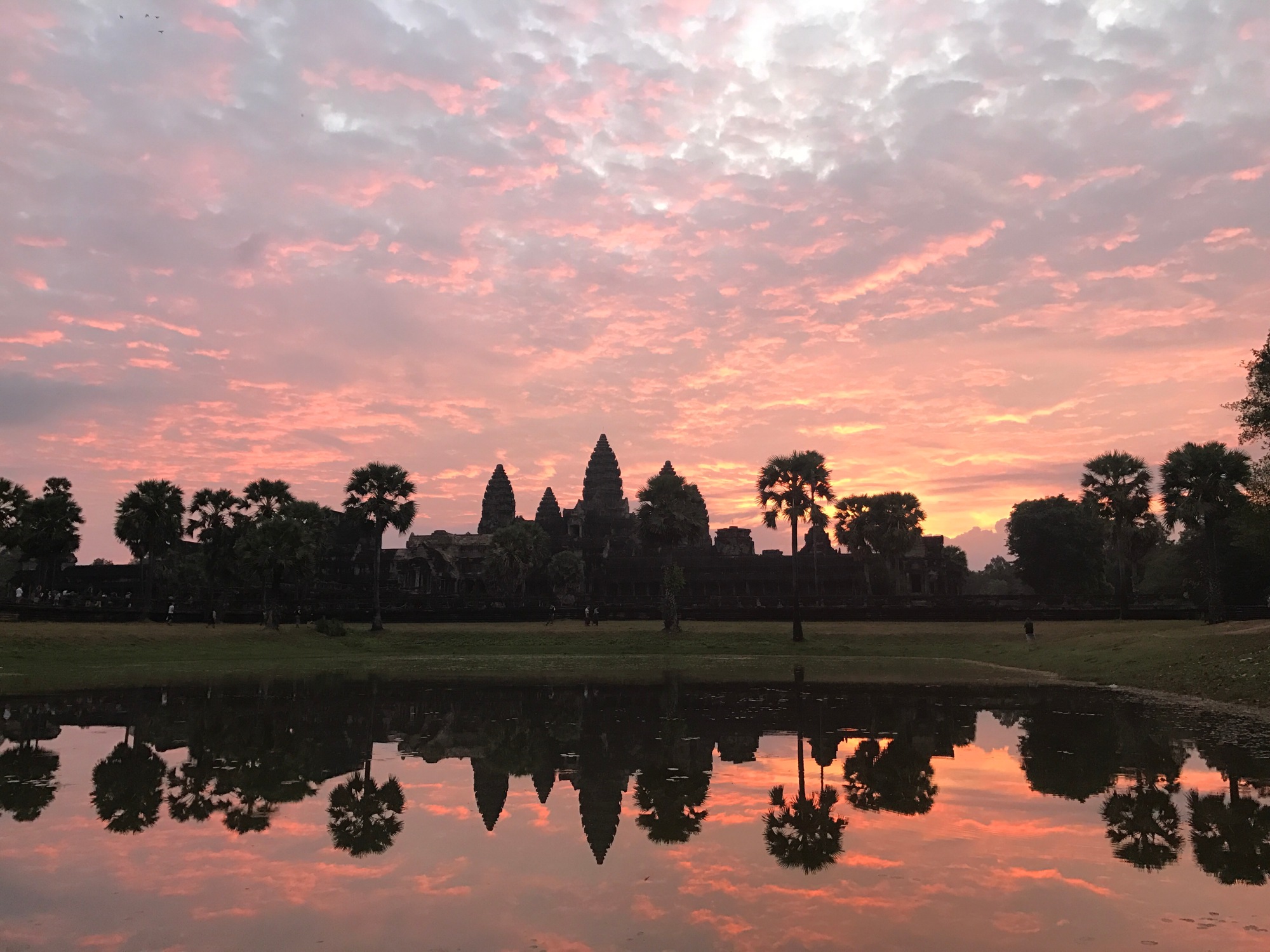 In between my trips to India and Thailand, I bought a ticket to Cambodia on a whim, which appeared to be a good option while applying and waiting for my 2-month Thai visa application.
Cambodia is the first place I visited without making any prior preparations and I am glad I did it this way since I was continuously impressed by everything from the moment I stepped out the airport in Siem Reap. First of all, I was not expecting such a modern yet authentic country.

Despite their hellish past, struggling through years of bloodshed, poverty and political instability, Cambodians are very kind people and their smiles are truly contagious (even when you refuse buying stuff from them!). Especially after the 2 months I spent in India prior to my visit, I wanted to thank everyone for just leaving me alone on the street 🙂

While the countryside remained untouched with countless rice paddies and sugar palm fields, the urban areas surprised me with their adaptation to the modern lifestyle. I met A LOT of expats who worked at various NGOs for teaching language, working as financiers or helping with the development of the country.

Siem Reap is the second largest city of Cambodia after Phnom Penh and was my first spot to visit. Despite the massive amount of tourists flowing here to visit the magical Angkor Wat ruins, the largest religious monument in the world, it is a spectacular city with its French infused architecture, world-class dining scene, fancy resorts, contemporary cafes, diverse nightlife and the art scene.

It was hard to miss that Siem Reap was pretty environmentally and socially conscious; for instance a lot of places let you refill your bottle for a small fee, you could see educative posters against child exploitation (mostly child sex tourism), and lots of training restaurants that aim to give disadvantaged Cambodian students skills that will allow them to pursue a career in several industries (mostly in hospitality). While picking places I ate or shopped at, I made an effort to choose the ones that had a meaningful cause.

I spent the first night at Siem Riep Hostel that attracted me with its pool and free bikes but I quickly realized I had been done with the young backpacker scene. I was probably the oldest one in the hostel, however it was good to share the temple tour with some other guys who signed up for a trip on the same day.

What to see in Siem Reap in 3 days:

When it got unbearably hot and humid in SR (up to 40C/90F) at the end of February and the fans were not doing enough for me, I decided to head down south first to Phnom Penh and then to the beaches.

My next stop after Siem Reap was the bustling capital Phnom Penh, which is also the hub that connects you to the buses heading to the beaches and islands. I booked a bus/minivan on bookmebus for $10 to get me from Siem Reap to PP in 5 hrs with a 30 min lunch break.

Instead of choosing a guesthouse, I booked a private room thru Airbnb in a building that had several comfortable rooms for travelers like me and it was fun to connect with other people for occasional sunset drinks on our common roof. The bonus was the super fast wi-fi connection and I was happy to do some work while traveling.

What to do in Phnom Penh in 3 days:

Phnom Penh is not different than any other big vibrant South East Asian city, with tons of motorbikes and food smells on its streets. Since traffic lights and sidewalks for pedestrians were scarce, it was a bit stressful to get from one place to another.  But to my surprise, most of the non-english speaker tuk tuk and motor taxi drivers were pretty kind people and they tried to google map my destination on their i-phones!

If you want to donate your money for a good cause and see the immediate results, a hut made out of tin costs only $1500 and can save a whole family from the scorching heat and monsoon rains. You can visit them here

Ayse’s plan is to expand the center to open workshops for women to knit and make crafts that would generate income for the center.

Update: I went to visit them again in 2018 and offered a 3 day workshop to teach the women to make macrame jewelry to support themselves. 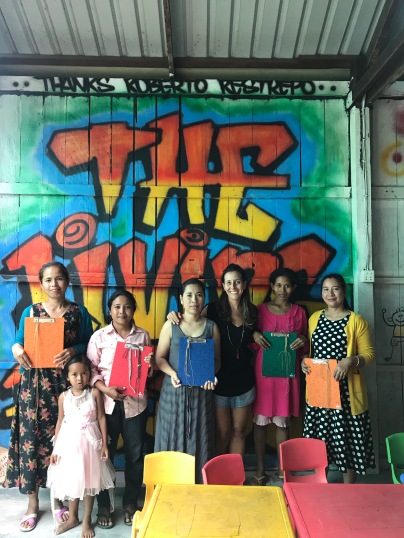 The graduates of the macrame workshop 🙂 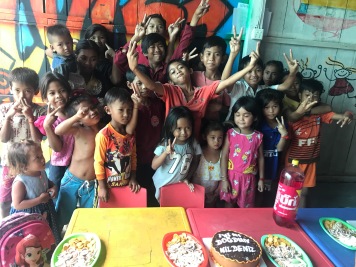 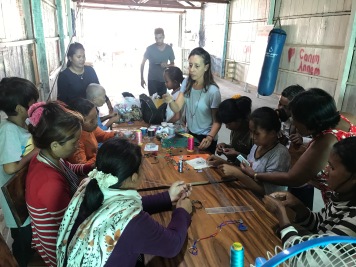 While I didn’t do much touristy activities in Phnom Penh, here are the other places I saw and liked: 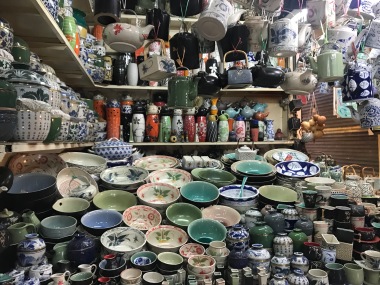 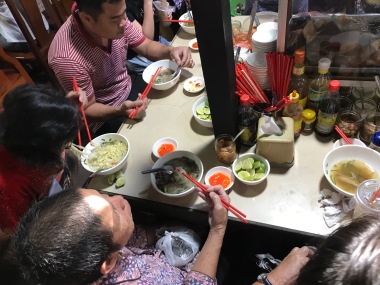 I had a great time in Phnom Penh and understood why so many expats chose to live there. However, I think that the large number of expats limits the jobs for locals. I support the idea that the expats should teach the skills (or whatever they are there for) to the locals and let them pass those jobs onto the upcoming generations. Let that be technology, internet, health, hospitality…

One last thing I would like to mention about Phnom Penh is the bag snatching cases that are coming often by the thieves riding past on motorcycles. I was particularly vigilant walking on the street (with no sidewalks) and traveling by tuk tuks, as I heard a girl was dragged on the road for hanging onto her bag while riding in the back of a tuk tuk

Since traveling in Cambodia via bus is the easiest and cheapest way, I quickly booked online a minivan ticket (with CTT bus company) that left Phnom Penh at 8:30 am and arrived at Kampot at 12:00 pm for $10.

Kampot is a small riverside town known for its pepper plantations, salt fields, decaying french colonial architecture and by being the slowest and quietest town of the country.

I originally planned to spend 2 days in Kampot and ended up staying 4. Later on I heard from several people that Kampot was addictive and many people couldn’t leave after weeks 🙂 I totally can see why! I would have stayed more if I didn’t have a time constraint.

Things to do in Kampot

When the time came for me to say goodbye to this beautiful sleepy town, I arranged a minivan ticket to Otres Beach through my hotel Two Moons Khmer House .

As per a few friends’ recommendations, I booked a private treehouse/bungalow at Mushroom Point  prior to my arrival (via Hostelworld) for $10/night and that was a great decision! However, if you have a bigger budget, I highly recommend the Beach Bungalows that cost $25/night and were located right by the water.

One of the nights I was at Otres Beach, I visited the Otres Night market that happens on Saturday nights and offered live music, bars and food stalls a la Brooklyn style. I was amazed by the fact that the whole market was very hipster and there were no locals or their authentic food

However, I was happy to find a feather hair wrapping stall to renew the feather in my hair that I had lost in India.

While I was burning with desire to swim among the bioluminescence planktons in Koh Rong, I had to cancel the island tours due to the rain that kept falling every afternoon. Sigh.. I will be back to you beautiful still remained untouched beloved Cambodia!

I had to leave the beach to join the Yoga Retreat in Siem Reap that I had been waiting for weeks. I opted for a $47 flight instead of a 12 hour bus ride, which I easily found on skyscanner.com. The taxi from Otres Beach to airport took 20 mins and $13 (almost 1/4th of the flight ticket!

Unlike it’s neighbor Thailand, Yoga is not a very common business in Cambodia (yet!).

I joined a 6 day yoga retreat as per a friend’s suggestion and was very happy about the experience.

Hariharalaya:  I joined a week long yoga retreat in this beautiful oasis located 30 mins outside of Siem Reap. While the level of yoga taught in the center was for complete beginners, which was a disappointment to me, they had several places to do your own practice apart from the 2-3 hours of daily yoga/meditation classes offered in the morning and afternoon.
We were a group of 30 people and I was very happy and inspired to see so many young backpackers diving into the yoga and meditation world and leaving the retreat with a more open state of mind.

I met really beautiful people there and had a chance to finish 3 books from their spiritual library, do some art and try to play instruments provided in the art center, meditate daily and practice rock climbing. There were several activities each day, which you could choose from that included chanting, dharma talks, meditation, yoga, partners yoga, alignment yoga, temple tour, kundalini meditation, small swimming (or more like a dipping pool) and amazing vegan food and fresh tropical juices available all day.

Another center in Siem Reap is Blue Indigo Cottage Yoga retreat offering daily yoga/meditation classes. I didn’t get a chance to go there but a friend recommended their more advanced level yoga classes. I made a note to visit them in my next visit, which I’m sure will happen!

Lastly, I made an attempt to go to Vagabond Temple in Otres Beach but they were closed for the season. I heard good things about their daily yoga classes, and detox and yoga retreat programs so you might want to email them to check their availability.

I left Cambodia with a smile on my face and in my heart and made a promise to go back!Thank you for your generosity beautiful Cambodia! ❤